Saidina Umar’s example of justice captured hearts and minds of the people of his time and is also relevant as an example for us today. In his view, justice was a practical way of calling people to Islam and opening people’s hearts to faith. He followed the same method as the Prophet (SAW), a way which based on justice that encompassed all people. Unlike many countries today who propose an ‘Islamic Justice’ without actually implementing it.

The Prophet s.a.w. and Saidina Umar r.a.’s success on the practical level is unprecedented, so much so that their names became synonymous with justice and anyone who learns even a little about their lives story can hardly separate the two.

There are 3 key reasons why Saidina Umar r.a. was particularly successful:

There are some examples of his attitude in establishing justice and fairness the people:

Saidina Umar ruled in favour of Jewish man against a Muslim; the fact that the Jewish man was a non muslim did not cause him to be unjust towards him or to be biased against him. Iman Malik narrated from Sa’eed ibn al-Musayyib that a Jewish man and a Muslim referred their dispute to `Umar ibn al-Khattab (RA). `Umar saw that the Jew was in the right and he ruled in his favour. The Jewish man said to him: “By Allah you have ruled aright.”

Saidina Umar r.a. used to command his agents to come and meet him on certain occasions, and when they had gathered he would say: “O’ people, I send my agents to you to beat you or take your money, rather I send them to protect you against any injustice and to divide the war booty among you. If anyone has had everything else done to him, let him stand up.” No one stood up except one man who stood up and said, “O’ Commander of the Faithful, your agent gave me one hundred lashes.” He asked, “What did you beat him for? Get up and settle the score.” `Amr ibn al-As stood up and said, “O’ Commander of the Faithful, if you do that, things will go out of control and it will set a precedent that people will follow after you.” He asked, “Should I not establish justice when the Messenger of Allah allowed people to settle scores with him?” he said: “Then let us make a deal with him.” He said: Here he is, work it out with him.” So they compensated him by giving him two hundred dinars, two dinars for each blow of the whip. If they had not made this deal, Saidina Umar would have allowed the man to settle the score.

Justice Regardless of Position and Affiliation

A man Egypt came to complain about the son of `Amr ibn al-As, who was Saidina Umar’s governors in Egypt. He said: “O’ Commander of the Faithful, here is man running to you from oppression. He said, “I will offer you protection.” He said, “I raced with the son of `Amr ibn al-As and beat him, and he started hitting me with a whip and saying, `I am the son of noble people.’ “Saidina Umar wrote to `Amr (RA), telling him to come (to Madeenah) and bring his son with him. `Amr came and Saidina Umar said, “Where is the Egyptian? Take the whip and hit him.” So he started hitting him with the whip, and Saidina Umar was saying, “Hit the son of noble people!” Anas said he hit him, and by Allah we liked that hitting, and he did not stop until we thought that it was enough. Then Saidina Umar said to the Egyptian, “Hit the bald head of `Amr.” He said, “O’ Commander of the Faithful, his son is the one hit me, and I am satisfied. Saidina Umar said to `Amr, “Since when did you enslave people whose mothers bore them free?” he said, “O’ Commander of the Faithful, I did not know about (this incident) and he did not come to me.” 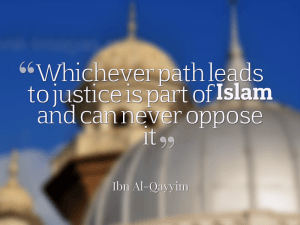 Something for muslims today to ponder.

Mohd Prasad offers Business and Leadership Coaching, Training and Consultation for small, medium and large enterprises. Certified as one of the Best Coaches by Centre for Entrepreneur Development and Research, Malaysia, Mohd Prasad brings to the table over 6 years over 50 companies with many obtaining 4 star rating by SME Corp of Malaysia. He provides business coaching and development in the areas of Strategic Management, Finance Management, Leadership, Sales and Marketing and Talent Development. He is also the Program Manager for the Bumiputera Vendor Development Program Batch 1 and Batch 2 comprising of 40 bumiputera companies. Mohd Prasad combines the unique experience of an engineer and his experience as a business owner and entrepreneur to formulate Business Engineering Formulas to troubleshoot problem areas to focus in the business. View all posts by Mohd Prasad Hanif